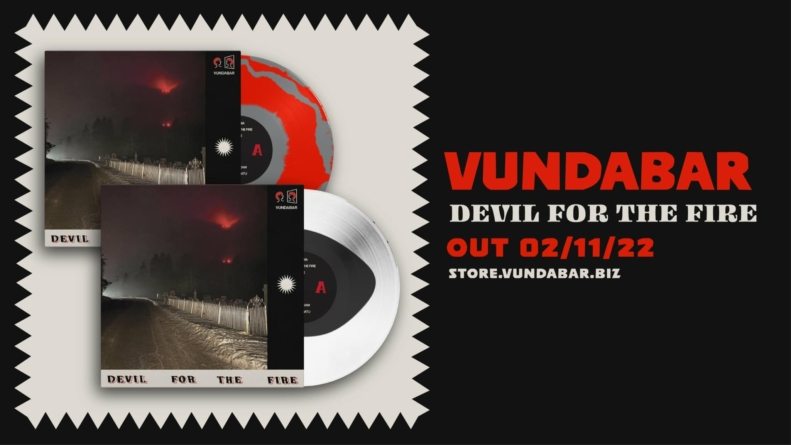 BOSTON, MA, January 11, 2022 /PRSearchEngine/ — Devil for the Fire, the new album from Boston-based Indie rock band, Vundabar is out now! The album featuring tracks like Aphasia, Ringing Bell and Heatwave is available digitally on all streaming platforms January 11, 2022; physical releases are available for preorder on Bandcamp with a release date of February 11, 2022.

East Coast indie rock band Vundabar have released their fifth studio album, Devil for the Fire.  The release follows the albums Either Light (2020), Smell Smoke (2018), Gawk (2015), and Antics (2013).  The new album from Vundabar is the fourth album to be released on the band’s independent label, Gawk Records.  Merch, including a Limited Edition Red and Slate vinyl pressing, is available for Devil for the Fire on Vundabar’s official Bandcamp page and the official online store on the band’s website.  Only 700 pressings are available of the LE vinyl, with 300 Black in Clear Color-in-Color copies available as well.  Physical releases of the new album are also available for pre-order from Banquet Records.

Vundabar is a Boston-based indie rock band consisting of members Brandon Hagen, Zack Abramo and Drew McDonald.  Active in the local music scene for nearly a decade, the band came together in 2013 with the release of their first album, Antics. In the years to follow, the guys have performed around the world.  Check out the band’s official website for 2022 Vundabar tour dates with stops planned across the United States, France and Canada.

The PR Search Engine staff is comprised of content writers with expertise in the latest SEO techniques and digital marketing practices. Evolving alongside the constantly developing digital world, our team’s tactics are on the cutting edge of the industry. Together, our researchers, writers and editors collaborate to generate engaging content that ranks for the long term to help you get found online.